The two Stratfords that are closest to each other, Stratford, Ontario and Stratford, Connecticut, have had a long history of cultural, sporting, and social exchanges. Each year exchanges are organized. In 1985, Stratford-Upon-Avon, England, became involved and with their involvement, a reunion has taken place every two years. There were reunions in Connecticut in 1993 and in Ontario in 1995.

Stratford, P.E.I., was created by statute in 1994 by amalgamating the four former communities of Southport, Bunbury, Cross Roads and Keppoch-Kinlock with the unincorporated area of Battery Point. At a Canadian Federation of Municipalities meeting in 1996, representatives to that meeting met Ted Blowes, the Mayor of Stratford, Ontario. As a result, they were asked to join the Sister Cities group and did so in 1997. At about the same time, Stratford, New Zealand, became interested and also joined in 1997.

There were five Stratfords involved in the 1997 reunion in Stratford-Upon-Avon. Stratford, Australia, joined the group in 1998, so there were six sister cities involved in the 1999 reunion in Stratford, New Zealand. In New Zealand, the membership was limited for a number of reasons, including the concern that if many more cities joined the group the time space between each city hosting a reunion would spread beyond twelve years and a loss of interest might occur.

Culture
The cultural aspect is important to the reunions. Three of the Sister Cities have well known theaters. A concert involving participation from each sister city is an integral part of each reunion. Each sister city asks its residents to billet or provide home stays so that the visitors can experience family living in a private home. This also helps to form lasting relations among the visitors and their hosts.

The reunions do not emphasize commercial relations as the organization is not in that business. There are no formal or other business meetings but there are many social gatherings. The only meeting usually held is to determine the location of the next reunion.

Local and national businesses are usually asked for support in defraying some of the costs involved in each reunion and have been most generous in the past. 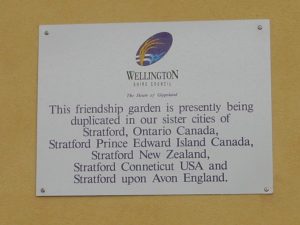